Home » Blog » Working with the Prosecutor in Criminal Matters

Working with the Prosecutor in Criminal Matters 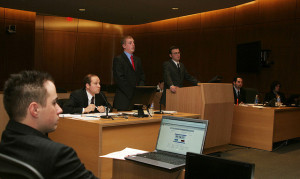 In criminal cases prosecutors have a lot of power, so its important to know how to work with them.

The criminal justice system is quite complex but the basic idea is that an attorney for the state, the prosecutors, brings charges against individuals that are believed to have violated the law as it is set out by the legislature in the Utah Code. What that means is that the whole process of criminal charges lies in the hands of the prosecutor and they have the power to aggressively pursue charges or dismiss them altogether. If the prosecutor decides to move forward with the prosecution then ultimately the power in the case is transferred to the judge or jury who is deciding guilt and then to the judge for sentencing if found guilty.

Because Prosecutors are the first line of opposition so to speak in any criminal matter it is very important to understand how a case can be made worse or better based on the prosecutor and the negotiation process with the prosecutor. In every criminal case the basic incentive structure is the same for the parties regardless of the actual individuals involved. The prosecutor wants a conviction at the lowest cost available, meaning least amount of time and money spent on the case. The defense attorney and defendant want the lowest charge possible and the least oppressive consequences, often at the lowest cost as well. In many cases these incentives align and a compromise can be reached where the prosecutor agrees to reduce or dismiss charges, stipulate to sentencing recommendations, or forego future prosecution in exchange for the defendant’s guilty plea.

However, in other situations no deal can be reached and it is important to note that the prosecutor is under no obligation to offer individuals a plea agreement, and depending on the prosecutor that is a scary amount of power especially if they want to be unreasonable or difficult to to work with.

The prosecutor negotiation process is vital to any criminal defense and because of that it is very important to get a defense attorney that will fight hard for you. At St. George Criminal Defense Lawyer we know the prosecutors and we have experience working with them meaning we know what to expect and we know what things work. Call or email us today to find out how we can help you in your case.

Working with the Prosecutor in Criminal Matters was last modified: January 8th, 2016 by Jerry Salcido
Posted in Plea Negotiations