Actual Physical Control of a Vehicle You Aren’t Driving

In State v. Cook, 2017 UT App 8, the court addressed a DUI involving a four wheeler and whether the defendant, who wasn’t driving the four wheeler, was in actual physical control of the vehicle. In that case, a police officer noticed an ATV driving at high speed on a snow-covered road. The officer observed three people on the ATV: a ten-year-old in the front, Elizabeth Victoria Cook in the middle, and an eighteen-year-old in the back. Cook was holding a beer can in one hand and the handlebars of the ATV with her other hand. The officer pulled the ATV over, but he noticed that the beer can disappeared. He found the beer can in the snow, which was opened and half-consumed. The officer also found another beer in Cook’s pocket. 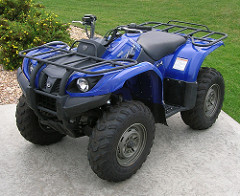 In the Cook case the court found the defendant was in actual physical control of a four wheeler even though she wasn’t driving it.

Cook was arrested and taken to the Iron County Jail where she underwent sobriety tests and a chemical breath test. She failed the tests and had a breath alcohol concentration of .119 grams. Pursuant to Utah Code Ann. § 41-6a-502(1)(a), a person may not operate or be in actual physical control of a vehicle if a test reveals that a person has a blood or breath alcohol concentration of .08 grams or greater. Therefore, Cook was charged with driving under the influence of alcohol with a passenger under the age of sixteen. She was convicted and sentenced after a bench trial.

Cook made three arguments on appeal: (1) she was not in “actual physical control” of the ATV because the child was driving, (2) the trial court erroneously admitted the results of her breathalyzer test, and (3) her trial counsel rendered constitutionally ineffective assistance.

The court then looked at Cook’s second contention that the trial court erroneously admitted the breathalyzer test results, and she argued that the officer did not administer the test properly. Cook said that the requirement for a fifteen-minute observation period was not met because the officer used his phone to start the observation period and used the breathalyzer to mark the end of it, insinuating that the two separate devices may not have been synchronized. However, the administering officer’s trial testimony dispelled this argument, as he testified that the machine was working properly, he properly administered the test, and he observed more than the requisite waiting period as marked by the breathalyzer.

Lastly, the court concluded that Cook’s trial counsel was not ineffective by failing to more thoroughly develop the motion to suppress. In order to establish ineffective assistance of counsel, a defendant must demonstrate both that counsel’s performance was deficient and that counsel’s deficient performance was prejudicial. The court concluded that a more fully developed motion to suppress would not have succeeded because the admissibility requirements regarding the breathalyzer results were satisfied. Therefore, the judgment was affirmed.